so i got the pi zero w (no onboard wifi…) I do have a wifi dongle for it, and was wondering if this will work for dietpi? I managed to get Raspian to load fine though it’s bulky for what I’m looking to use the zero for…simple pi-hole + piVPN for starters. anyways, i flashed the file to my card, modified the config files per some random youtube videos (i know…lol sounds horrible) FWIW, Headless install of Dietpi | No Monitor, No LAN, No router login | Pre Configure WiFi - YouTube was the video I followed. the pi has been plugged in now for at least a half hour, the green status light is now solid (not flickering any longer)…and when I pinged the pi I’m getting destination unreachable still…so for shits and giggles i decided to connect my microHDMI to HDMI adapter to the pi and my TV and appears I’m “stuck” at a login prompt but i dont have a keyboard and was expecting to do this “setup” under ssh. any ideas where I messed up (well, other than buying the pi without onboard wifi lol)? 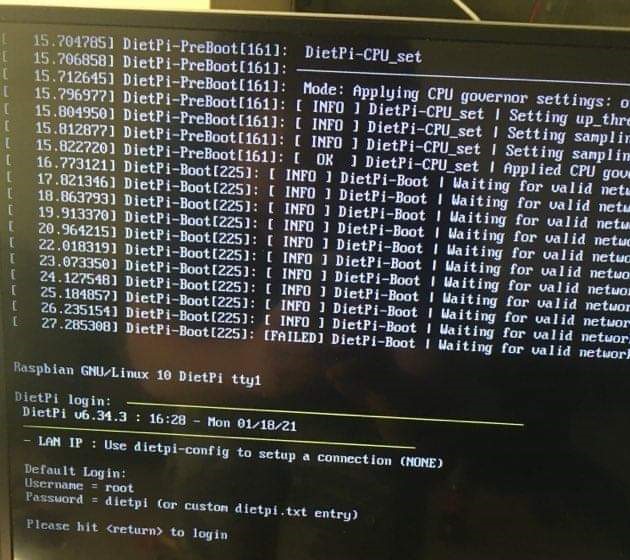 your main problem is the missing network connection. Did you configured WiFi upfront/before first boot ?

yes in the options file, atleast thought i did. everything was in single ’ rather than " is that correct?

When I plugged it back into my laptop card reader i noticed the config file is now gone…where would i find those settings at?

the initial wifi config file is removed after first boot as it is needed to setup thinks only. During normal operation network interface configuration is stored in /etc/network/interfaces while wifi information located at /etc/wpa_supplicant/wpa_supplicant.conf

Bad think, we don’t know if your external usb adaptor is detected correctly by the board and we don’t know what the name of this usb interface is. As you don’t have a keyboard attached, we even could not check it…

yea unfortunately under Chromebook it only appears to let me see the “boot” partition i guess is what it’s called.

https://dietpi.com/forum/t/getting-started-download-dietpi-image/24/1 he shows the SSID in " but should be quoted with ’ or " quotes? Or none at all? lol cause ive noticed in the other files no quotes being used, but quotes are references in this section?

the post you linked is quite old. I would recommend using our new online docs https://dietpi.com/docs/install/
Right before section 3. Prepare the first boot, you will find the information regading WiFi settings. Basically add your details between the single quote

odd. still the same result with the single quotes. like it’s not connecting to my network.

something that caught my eye though

ifup: failed to bring up wlan0?

but my usb dongle has power…lol. and obviously the pi zero does too. FWIW, the dongle is plugged into the “lower” USB port, and I have the “middle” usb port plugged into my wall adapter. 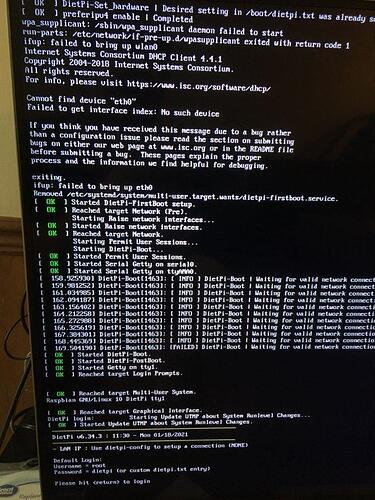 I don’t use a wifi dongle, so I’m not 100% sure on it. But probably the WiFi dongle is not using wlan0. Maybe it’s a different interface

MichaIng
Maybe you have any experience on this

thanks for the ping, hoping someone else has some insight LOL. as i mentioned, it worked quite flawlessly (though bulky for my current needs…) using Raspian…lol. so that’s why i wanted to try out the dietpi route cause I read reports of “failing sd cards” which DietPi is supposed to have some “better protections” in place lol.

Well DietPi is nothing else than an extreme lightweight Raspberry OS with reduced amounts of packages installed. As well DietPi aims to reduce r/w operation on SD card as much as possible.

could it be possible that dietpi just doesn’t have a “driver” for my wifi USB dongle? I was actually shocked that it “worked” out of the box with Raspbian

well at the end it is still a Raspberry OS and usually thinks are working nearly the same. Unfortunately you don’t have access and we are not able to check.

what you can do is following. Install normal Raspberry OS. Once installation is completed, we could check what interface is used. As well you could try to install DietPi on top of Raspberry OS using the PREP script

alright i may just give that a whirl then.

In dietpi.txt btw quotes btw must not be used, since it’s content is parsed via sed/grep. In dietpi-wifi.txt quotes are required if you use special characters or spaces in SSID or password, since it is sourced, hence treated as it’s content is “executed” in the shell. Use single quotes at best, since they won’t expand $ as variables and such. The dietpi-wifi.txt template however shows that pretty fine.

I see it’s a bid nasty if WiFi on RPi Zero failed, and a reboot (plug off, plug on) does not solve it, e.g. credentials are wrong, there is no way to redo it without accessing the ext4 root partition on an external system or attaching a keyboard, which is no possible as the on micro USB port is used for power supply and the other one by the WiFi adapter

I was wondering that ChromeOS has no ext4 support, as it’s Linux, but indeed they dropped it

: https://bugs.chromium.org/p/chromium/issues/detail?id=315401
Crazy guys, no way I can even consider using this OS when the major (!) Linux file system is not supported, only because they want to be able to rename volume names via their GUI. Enough trouble on Windows with this.

Raspberry Pi OS has btw has the same WiFi drivers/firmware pre-installed, so this should not be a difference. AFAIK on Raspberry Pi OS you place a wpa_supplicant.conf into the FAT/boot partition to have WiFi preconfigured, right? If that works, while dietpi-wifi.txt doesn’t, would be interesting how both final /etc/wpa_supplicant/wpa_supplicant.conf differ. Special characters and hidden SSIDs are currently the two things I can think of which might be an issue.

im gonna revisit this since i got a couple days off…

keeping the quotes there i assume, since they were present when i opened the file? But they only show single quotes and not double quotes " vs ’ is that formatting correct?

I removed WiFi SSID and password as it is not wise to share such privat information on a public board.

It’s not my real PW

This looks like a message from your SSH client. You client is complaining about a changed host key. Did you used this ip somewhere else in the past? Maybe you can clear the host key on the client side or use a different client

YEP that explains it…ahhah. My “previous” pihole install using the “Raspian” version (for my little old pi0 lol)…was using that IP Address, so I found in the SSH client settings to “remove” the old hash and it’s connecting now and ONLINE.44

So all in all not totally sure what fixed the Wifi connection, but Im thinking the first time I attempted the “first boot” i omitted the single quotes with my SSID and PW.

ok good it is working now.