XU4: Kernel or hardware issue? A lot of errors

as you already know I have a few issues with my Odroid XU4. At the beginning it was a problem with sudden freezes, than a heat problem. So I decided to reinstall DietPi on my device.

The installation was smoothly. I was able to dietpi-config everything as needed, I made a firmware-update as well. But when I try to install some software (after a reboot, Webmin to be precise) via dietpi-software the device throws out a lot of lines and I can only cut the energy cause the device isn’t reacting anymore.

I was able to make a screenshot of the last lines, but there were much, much more to see on the monitor. 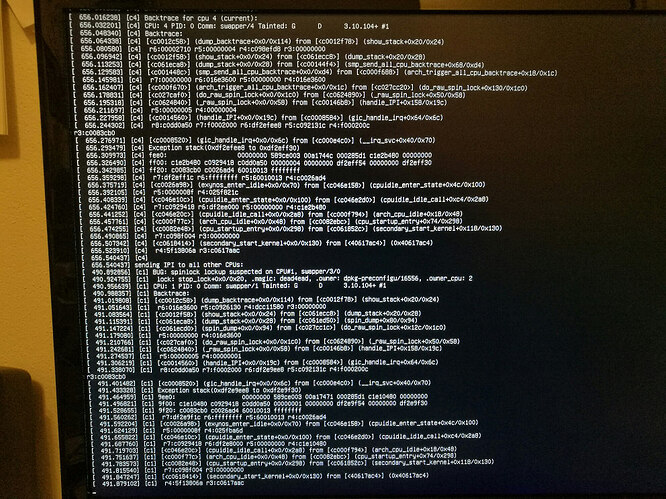 XU4-error.jpg992×744 269 KB
Is this a software aka kernel-problem or do I have a hardware related issue that has to be addressed to the manufacturer Hardkernel?

Thanks again for a look on that. I appreciate that a a lot.

At the beginning it was a problem with sudden freezes, than a heat problem

Most likely PSU related, insufficient/unstable power. At least 6A PSU for XU4 is highly recommended. I use a 8A with cloudshell after the 4A gave me endless similar issues (even without cloudshell).

I don’t believe it to be a kernel issue, Meveric (who maintains the kernel) does a great job of making sure these are stable before release.

Or do I have a hardware related issue that has to be addressed to the manufacturer Hardkernel?

Its possible the board has a progressing failure, however, the only way to find this out would be to re-run your tests, using a different 6A PSU (+ SD card/EMMC where possible), to exclude those from the issue.

Which PSU are you running now?

Actually, after reading this, i’d probably send it back if under warranty. Thats far too hot for the CPU (possibly beyond thermal limit), damage may already be done. 125’c? seems thermal throttling didn’t kick in (which is usually 90-95’c)