Hi,
I have had a dietpi setup running for some time. I have now set it up on an old laptop and it is working great guns.
I have setup pihole with unbound and I also manually set the /etc/resolv.conf to go through nameserver 127.0.0.1 (ie pihole).
Recently I noticed some odd requests in the PiHole logs coming from localhost (ie dietpi itself). They are below. I have removed the first numbers for each IP address just in case they reveal something I shouldn’t be revealing. 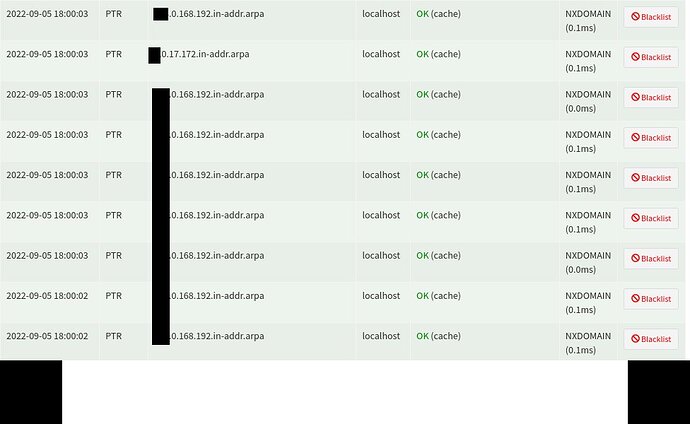 These are just reverse lookups, nothing to worry about.

If I close my eyes they go away.

Don’t do it this way as this will be a single point of failure on your system. In case PiHole is failing, your system will not be able to perform any fix / reinstall as long as you switch your system back to a global public upstream provioder. Usually there is no ad that will be blocked on a DietPi system as we don’t call any strange side on the web. We just check for apt and dietpi updates. At least as long as you don’t have a desktop installed

Btw: for the localhost request, they are generated by PiHole itself and are not influenced by the setting done in /etc/resolv.conf. They will not go away whatever DNS server used

Thanks Joulinar.
I will change back to some other external DNS.
Wasn’t really concerned with the Dietpi side of things. Really checking on apps that I have installed and just interested to see what they were up to.
I also have some other lists activated besides advert blocking. Trying to cover as many bases as possible.
Sorry for the delayed response. Don’t normally do forums.