[Solved] Running out of disk space and don't know why

My dietpi installation is running out of disk space and I don’t know why.

Important things that may help locate the problem:

I read another case where transmission would be the problem filling up space on the booting drive. I don’t know if this can be the case as my booting and data drive is the same SSD, just a different partition.

Any help or idea would be appreciated. 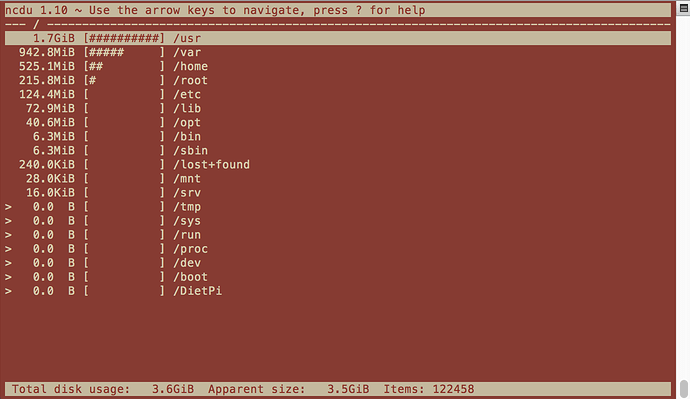 It’s your /dev/sda1 that is filling up

do a df -h and du -h on the /dev/sda1 partition and see which directory is using the most space…then figure out what is writing to that space…and figure out how to either blow out the un-needed files, and/or create a cron job to clean it up for you

Something is definitely filling up the drive…and not cleaning up after itself…
Where is your PLEX writing it’s “transcode” files?
/var/tmp?
Per the PLEX site…most linux flavors store em here
$PLEX_HOME/Library/Application Support/Plex Media Server/Cache/Transcode/Sync/

ncdu makes it easy (new curses) , starts in the directory you invoke it,
with the current users rights, su (or sudo) for full power, carefull !!!
It does take a while to scan all files before it starts (if there are many)

Thank you so much to both of you for your replies.

It turned out I had files located under mount points. I found out this on a stackoverflow thread

Frequently if you mount a directory (say a sambafs) onto a filesystem that already had a file or directories under it, you lose the ability to see those files, but they’re still consuming space on the underlying disk.

This is why du and df were telling me different results.

Here’s how I solved it.

On Linux you can easily remount the whole root partition (or any other partition for that matter) to another place in you filesystem say /mnt for example, just issue a

du -h /mnt
and see what uses up your space.

This is the original thread
https://serverfault.com/questions/275206/disk-full-du-tells-different-how-to-further-investigate