Samba file server - How can I set root folder as base directory ?

I’m new to dietpi. I installed in on my Raspberry Pi 4. It works great. But I have a question about Samba/SMB server.

I choosed Samba server over FTP for a better integration with Windows and my Windows apps. But I have an issue :

I would like the base directory to be the root folder of my pi. I often need to access various folders such as /mnt, /home … I found on the wiki how to change the base directory for the samba share, but it doesn’t work with root. I can only choose folders such as /mnt or /home as base folder. I would like to choose / . I can use this command found on the wiki :

If I only put / in /Path/To/Directory, it doesn’t work. I don’t want to enter this command each time I want to switch between /mnt or /home. I would like to be on the root of these folders in samba.

How could I do that ? Thanks in advance for any answer. Any answer is welcome. Have a good day!

that should be quite easy. Just edit the smb.conf file manually. 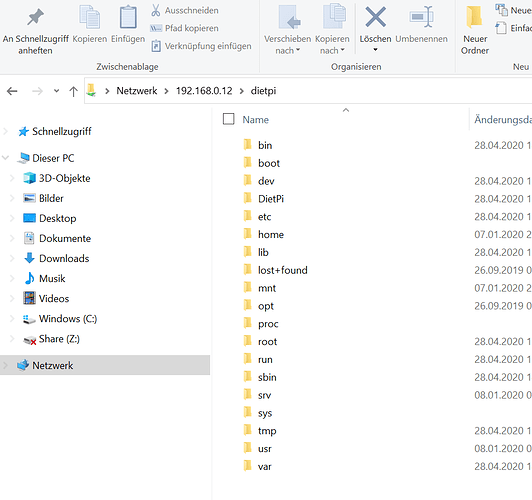 It works perfectly, thanks ! That’s exactly what I wanted to achieve.

But I have an issue : there is lots of folders I don’t have the permissions to access like /root : 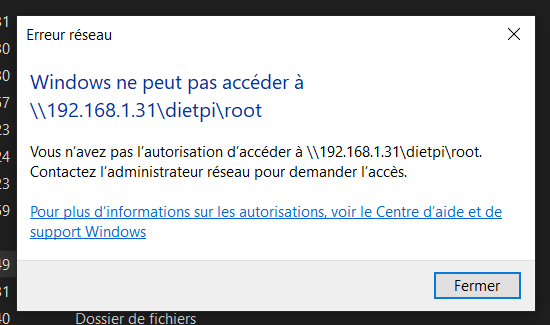 How can I manage the permissions for the SMB share ? How can I authorize this folder ?

Thanks in advance for your help. Have a good day !

If you really like to get access to this directory, you would need to login as user root. That would mean to allow root access to your system via SMB. Usually this is a security risk and should be avoided if possible. However it’s something that can be archived as follow:

It might be Windows is caching the old SMB access (with user dietpi) and it is not going to ask for new user/password. If this happen you might need to clean your share by using net use \\dietpi /delete for example, if dietpi was still the name of your SMB share.

Ok thanks a lot for all your help.

I use my pi to run a minecraft server, and a jellyfin media server. So the only folders I need to access through SMB are
/root/minecraft
and
/mnt

Maybe I could minimize the security risk by allowing SMB server to access only these folders (not whole /root, only /root/minecraft)
How could I do that ?

And thanks again for your help ! Have a good day

if you need to access these 2 directories only, you would need to create 2 samba shares. Lets edit your smb.conf again.

remove the whole [dietpi] section at the end and replace it as follow.

Thanks you so much ! Everything is perfect now. Have a good day !!!