I am new to the forum. First of all thank you a lot for all the work you put into DietPi. It seems to be THE distribution to use, especially on an older Pi. I have been trying different linux distributions in the past days. My goal is to setum my raspberry pi 2B with a desktop linux and run a surfbar on it using firefox or chromium. I had a lot of bad luck in the past days as the micro sd card that i was using with an adapter was broken. I spare you the details but it took me several hours to find out.

Unfortunately that was not the only issue. I installed raspberry pi os first. Not only was it pretty slow, firefox would not start at all. Then I stumbled across dietpi and installed DietPi_RPi-ARMv6-Bullseye.img on my pi. I was able to set it up (it took a lot of time to install all packages required) using a wifi dongle. Now the desktop environment is running but it’s very slow. Firefox won’t start here either. The cursor indicates that it is loading for a while but then nothing happens.

I did a benchmark and put a photo of it into the attachments.

Is my pi just too old for this? Any idea where I can start digging?

Best regards and thank you for your time! 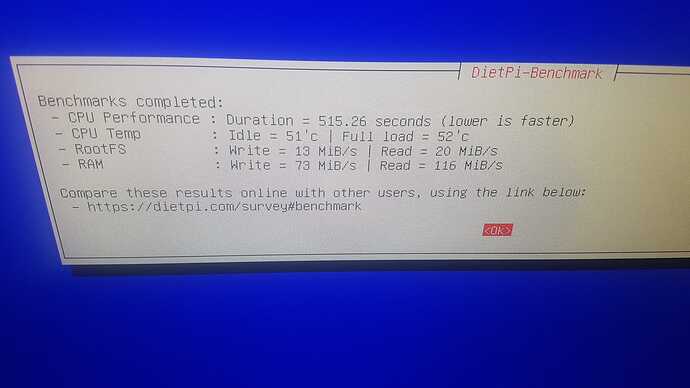 First of all with an RPi 2 I recommend the ARMv7 image, which is based on Debian (instead of Raspbian) and makes use of ARMv7 features, smaller binaries and such.

That Firefox does not start and your CPU benchmark score looks more like an RPi 1. The average RPi 2 CPU benchmark is 10 times lower/faster, so yours is far away from any expected random or production variation.

You were right! I have a Raspberry Pi Model B Rev 2

facepalm. I used it a few years ago for the last time. This is why I must have confused it. I guess I can kiss off using it for firefox then? I have a Pi zero (V1.2), too but I guess that’s not fast enough either?

Thanks for the quick reply! Again, sorry for not double checking it. My Pi was in a case and I was pretty sure about having the other model.

my raspberrypi-B2 and nuc having following benchmark. 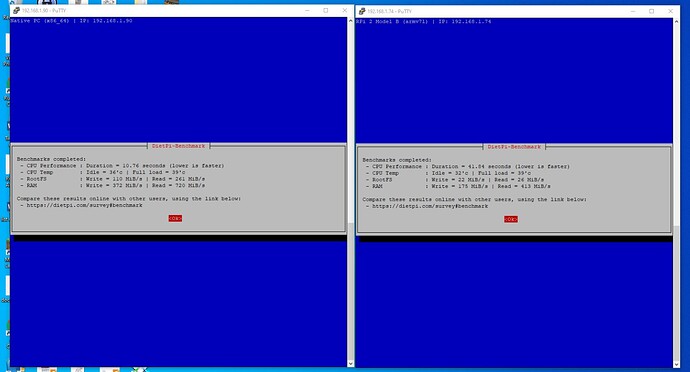 Can you run firefox properly with your PI1B2? btw. I use the following micro sd card: SanDisk Extreme microSDXC 64GB + SD Adapter / 160MB/s A2 C10 V30 UHS-I U3 - No modifications to my Pi whatsoever… And we are talking about a fresh install.

mail2rst is not running a RPi1. He has a RPi2 Model B as you can see on his screen shot. Right picture, top left corner.

ah I see. So that explains the results

… Does anybody of you run a Pi1 nowadays and can tell me about the browser performance?

I tested it on a RPi1 and both Chromium as well as Firefox are not working. I guess it is due to the ARMv6 architecture. At least I get Illegal instruction while starting both

MichaIng
I remember we had something like this in past already. Isn’t it?

At least I just recently read on RPi GitHub a similar report, advertising Firefox as alternative to Chromium on ARMv6, but it fails the exact same way. Nasty, looks like we need to add another browser to our list which works on this architecture. But we should also report to Raspbian, probably something can be done about it.

I will post a link to this thread and some additional information in the raspberrypi.com forum! Thank you for looking into this with me. I guess it’s a new pi for me then. During the chip shortage … hooray

I was able to install Midori browser on my RPi1 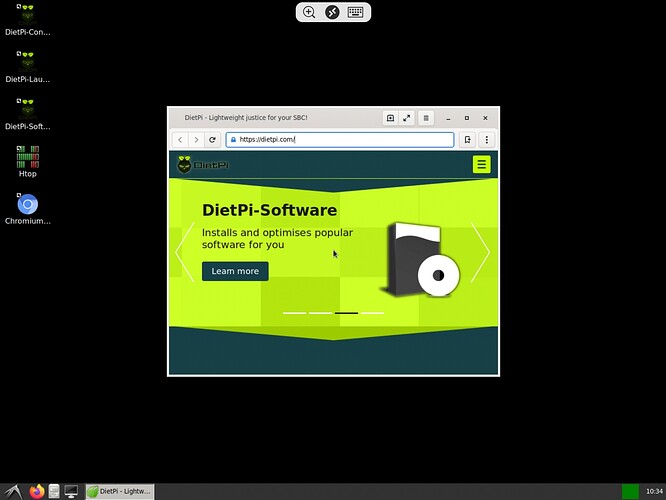 I guess apt install epiphany-browser would work as well, the old Raspbian default browser. I reported the Firefox issue on Raspbian bug tracker now: https://bugs.launchpad.net/raspbian/+bug/1956152
I fear that it is the same underlying issue as with Chromium, hence not trivial to resolve. Probably the older Firefox version shipped with Buster can be made available on the Bullseye repo. I’ll disable Chromium and Firefox on Bullseye+ for ARMv6 now. Probably I’ll find time later to test Epiphany as another alternative to implement into dietpi-software so that we at least have one browser for those RPi models available, but there are some other audio related tasks/fixes on the ToDo first

. A pain that hardware resource usage seem to have increased so much across all browsers. It likely never worked great, but even before RPi 2 the official Raspbian image shipped with Epiphany as default browser, so obviously it did work sufficiently well that time.

Thank you all for your feedback on this matter. I tried the other browsers you suggested to get an idea of the performance. I am also pretty suprised how resource hungry browsers are now, even on pages like google.com . I guess I will wait for the Pi 4 to be in stock again and order one then. Maybe I can put my Pi 1 and my Pi Zero to other good use

happy new year to you too

On DietPi it can be simply installed via dietpi-software.

Checking the other not really fitting posts, I guess a spammer. @amadjan correct me if I’m wrong

, in which case I’m sorry for the assumption.

EDIT: Jep, also in SFS database now, I removed and blocked it.