I have the Adapter shown on the Photo and it wont Work. Its LEDs light up and keep blinking. I have a similar adapter (same White Case) with another Chip (I guess) that works just fine.
So do I have to buy another one? 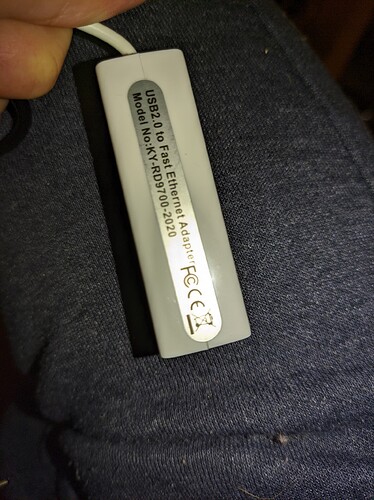 Does this adapter is working with plain RPi OS?

Would have to try. Do not have an SD card with that. I only use dietpi.

Would be interesting to see how it behaves. Do you have a spare SD card available?

Regarding to some posts in the official RPi forums it’s possible that they indeed use different network chips in the same adapter.
Some users wrote, he got it working when the adapter is connected and he rebooted.
And also this guy got it working: USB devices for Raspberry Pi – Arduino, Raspberry Pi and ESP8266 Small Computers!
Is the adapter at least recognized as something when you connect it to your SBC?
lsusb

Gonna need a special driver, might be pre-compiled in module form

Will try another Image. What do you recommend? Will try it with my fresh sd card.
Is there a simple way to implement the driver and flash the diet pi image before using it for the first?

That shows it was working in 2015. Why would someone remove a driver?

Why would someone remove a driver?

Will try another Image. What do you recommend?

you can try to original RPi OS image.

Will flash this and report back:

I guess the light version should be enough

Does it have SSH built in as dietpi does?

For headless setup, SSH can be enabled by placing a file named ssh , without any extension, onto the boot partition of the SD Card. When the Raspberry Pi boots, it looks for the ssh file. If it is found, SSH is enabled and the file is deleted. The content of the file does not matter; it could contain text, or nothing at all.

Did it. Unfortunately IP scanner does not find it. Seems to manually need a driver install which is quite complicated for a headless device with only 1 USB Port.

In this case the adapter is not working together with your SBC and you would need to check for a different one.

I Had a similar problem years ago and simply connecting via usb hub in front of the (otherwise not working) LAN adapter fixed it. Is that possible Here?

LAN adapter fixed it. Is that possible Here?

just give it a try.