Hi all as per title I just start using Dietpi and have some problems.
My only previous experience is with OMV and this was for only 3-4 months.
I just build a XU4 and Cloudshell 2 box running the OS on 16GBeMMC , attached 2 x 3TB HDD and run it headless.
The installation was pretty easy and selected for now Emby server , Nextcloud , OpenVpn , Samba , Docker and Cloudshell.
Emby is working well but except that evrything else can’t figure out how to sort out.
First and main problem Samba : I moved the user data on one of the HDD , I can acces it on my windows PC but no way that I can see what I allready have on my both HDD. How can I mount the 2 HDD so I can see the data I allready have on them and not only the user data ? Both HDD are mounted and the one without user data is my media HDD ( Emby can see it and play media from it)
Second problem is the Cloudshell not starting after reboot. On boot it shows the booting info and then stops on root login. To start the Cloudshell I have to SSH and manually start the Cloudshell script so I can get the CPU ,HDD,temp and all other info. I can see it on auto start menu ( dieypi-launcher) but no option to change autostart or manual start.
Third problem I don’t know how to use docker on Dietpi - on OMV it’s integrated on the webpage so is very easy to use but on Dietpi can’t find something similar. Is there something else I need to install to get that web like interface?

Sorry for the long post but trying to get everything up and running. I was very happy to see that Dietpi fully supports the Cloudshell display and the XU4 , and this was the main reason I give up on OMV.

are there any errors in /var/log for the stuff that isn’t starting?

Generally /mnt/dietpi_userdata should be moved via dietpi-drive_manager. But from what I understood the issue is accessing the data from Windows?

What file system did you format the drives with? ext4, the default on DietPi (and generally Linux systems) cannot be read by Windows. NTFS work on both, although it has limited permission features on Linux. If you format a drive with NTFS via dietpi-drive_manager, we add it to fstab with some permissions workaround so that you can store userdata there and it should work with our software.

To have the correct fstab entry it is even sufficient just start dietpi-drive_manager unmount and remount the related NTFS drive/partition. So no format is required.

About the login prompt, even that you selected an auto-login option from dietpi-autostart is recognized and we are investigation what causes this. Something with systemd seems to have changed: https://github.com/Fourdee/DietPi/issues/2404

By default on DietPi docker is installed headless, so without any UI besides CLI. I did a quick search and there seems to be a web UI that can be installed an runs as a separate docker container. Perhaps this (or something similar) is pre-installed on OMV.
Check: https://linoxide.com/linux-how-to/setup-dockerui-web-interface-docker/
When installed docker via dietpi-software, start from step 3 to install the UI.

Report back if this works well, so we could add it to dietpi-software as an optional/separate install.

I’ve finally dragged my Cloudshare2 Odroid X4U box off the shelf to see if I could get it going. It has 2 x 1TB drivers installed. I’ve installed DietPi and the Samba server software. I then used dietpi-drive manager to format the 2 drives as NTFS, I also mounted the 2 drives.

What I’m trying to do is simply use the Cloudshare device as a NAS box, but I cannot get Windows 10 to recognize or ‘see’ the drives. Is there something else I need to do in DietPi to complete the setup of the Samba Server? I can struggle my way around Linux, but I must say, Dietpi has saved me from a lot of grief. Is there something simple I’m missing? At the moment, I’ve got the little 2.5" LCD showing the Dietpi Cloudshell stats, but I don’t really need that working - if I have to sacrifice the display for the Samba server operating in headless mode.

Samba works independently from Cloudshell, so you can run both beside each other. This is actually something where DietPi takes special care, to not make the device a single-use machine, but allow to run multiple software in parallel without interfering.

Note that, when installing the Samba server via dietpi-software, by default it shares /mnt/dietpi_userdata, but no external drives.

This can be changed inside /etc/samba/smb.conf.
You can add each drive as separate share, but if you need access to multiple external drives, it is easiest to share the whole /mnt dir. For this replace beneath [dietpi] the line path = /mnt/dietpi_userdata with path = /mnt
Also read https://dietpi.com/phpbb/viewtopic.php?f=8&t=5&start=10#p56 about this.

Also note that NTFS is not required nor recommended, if you only share the drive via Samba to Windows, instead use default ext4 files system then. Only if you want to attach and access the drive(s) directly to/from a Windows machine by times, NTFS is required.

Silly question. I’m now trying to unmount the drives and the manager won’t let me. Says the drive is busy. I want to reformat as EXT4 and they must be unmounted first. Correct?

Jep they must be unmounted first. Hmm check htop if there is something active accessing the drive. You did not yet configure Samba to access them, right? Otherwise you need to stop the Samba server. Also if you moved the swap file to an external drive, this needs to be disabled first.

Did you try unmounting via dietpi-drive_manager? This will stop most services (inkl. Samba) automatically and give a hint in case of active swap file.

I haven’t done anything since the previous post. Thought I would reformat first. Don’t see Samba running. Do I have to do something to start Samba, or will dietpi start it automagically?

DId not move the swap drive.

I’m now trying to unmount the drives and the drive_manager won’t let me. Says the drive is busy.

Hmm, not sure that what causes the drive being busy. Could you post what htop shows is running? 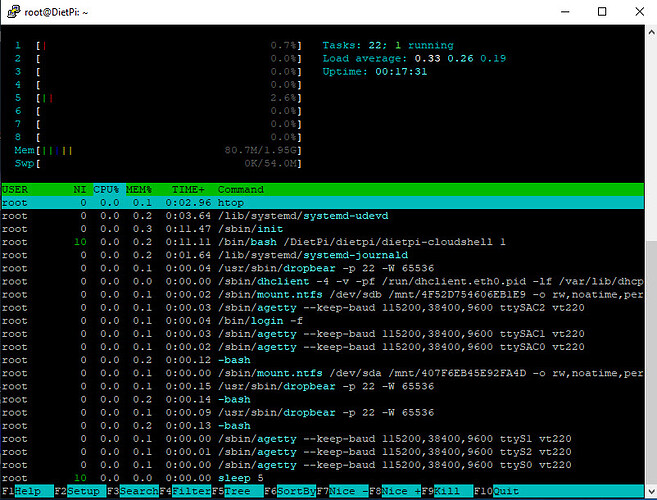 Hmm, the list is not complete, if you scroll down via up/down buttons, you should see more.

However perhaps dietpi-cloudshell somehow blocks the drive by reading it’s information for a certain scene, not sure.
There is a NTFS specific process active, which is responsible to mimic unix permissions, which are otherwise not supported by NTFS. This should not block the drive from being unmounted, instead stop automatically if no NTFS drive is mounted.

But just in case you can try to kill the /sbin/mount.ntfs and dietpi-cloudshell processes by selecting them with up/down buttons and press F9 and return.

Thanks for all your help. I’ve decided to uninstall both samba and cloudshell and start-over. No worries, it’s good practice I need! I think I better understand the order of things now. I’m going to get Samba going first with the drive configuration before installing Cloudshell. BTW, do I need to install the Samba client, or just the server? I will be operating as headless.

One thing I’m curious about with Dietpi is when you install software, how do you tell it to start automatically. I know that’s an option on the menu, but when my son and I couple of weeks ago installed the Roon Bridge, we thought we then had to go and tell Dietpi to start it. Only to find out it had started without any additional software configuration once it rebooted.

Ok, I reinstalled Samba FS and manually formatted the drives back to EXT4. I mounted each using Drive_Manager. What’s next now? I’ve edited the path = /mnt in the smb.config and saved. Is there anything else I need to do in DietPi? I still cannot see the drives in WIndows as drives under Network. Something in Windows left to do? How does Samba start as a service in DietPi?

A reboot should have solved the busy state as well, in worst case shutdown, plug off drives, start up again and re-attach. However not bad as well playing around a bid, to learn how things behave on Linux systems.

You don’t need to install the Samba client. This is required only, if you have a Samba server on another machine (e.g. Windows) and want to mount it to the DietPi system. This is actually easiest done via drive manager > Network drives as well.

When you install software via dietpi-software it implements a systemd service automatically to start on boot and handle when you do maintenance stuff (e.g. updates, drive manager, other software installs and such). You see dietpi-services starting/stopping as sign for this.