Trying to bring an Allo Digione Signature with RPi4 up to current (from 6.26.3!)… but dietpi-update reliably fails saying it can’t find either of rpi-eeprom and rpi-eeprom-images.

I really need to get (for instance) 6.27 installed, as at least the release notes say that some power optimizations were made, and as of now, this poor little guy is cooking himself - it zooms up to 70 C right away, and I am already telling it to use the “Conservative” power profile.
Am I expected to somehow locate these myself and hand them to the update script?
Any suggestions or questions?
Thanks! 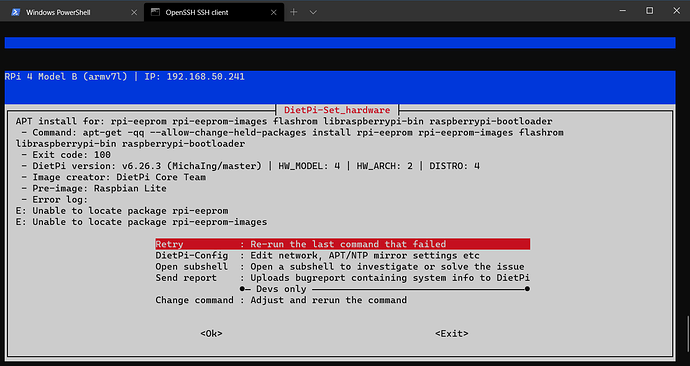 many thanks for your request. Am I right you are still running Debian Stretch? The package is not available on Stretch. You could try to manipulate this step by selecting Change command as soon as you are hit by the issue. This will open a new window where you could remove rpi-eeprom and rpi-eeprom-images from the command. In general I would recommend to run dietpi-backup before doing dietpi-update. You never know what will happen

Anyway, you should think on moving to Debian Buster, otherwise you will miss firmware updates for your RPi4.

Thanks for the response and suggestion(s).

You seem to be basically saying I can a) possibly continue to limp along with an older distro (if I can find where and how to edit the update script to not ask for these pieces) and b) that this would be a dead-end, and my device should be using a newer distro to begin with.

I can take a quick look - after I restore power to this overheating device - to see if I can locate a script to edit… but, I am afraid the real solution needs to come from Allo, the company that sells this HW/SW package.

I do not wish to “brick” the somewhat high-end audio device (an Allo DigiOne Signature) that we are actually talking about - and was sold to me - by departing from standard and expected maintenance commands. I can for sure pass along the substance of your post “if you are still on Stretch, perhaps you might want to re-think that” to them.

Thanks again, and if I do get anywhere with attempting to edit the update script, I will post my experiences back here.

I don’t know why you like to edit the update script? Just run it as normal. Once hit by the error, select Change command. This will open a new window where you could remove rpi-eeprom and rpi-eeprom-images from the command.

The selection menu is as well shown on your screen print.

And Debian Strech is not death end. It’s the older version, still maintained. But it might not get all features anymore. Current Debian version is Buster.

Thanks - that clarifies things - I didn’t get that this was a possibility already being offered to me by the interface I see.

In case it wasn’t obvious, last night was the first time I have even seen a Pi up close and personal (and I only spend a small part of my life in Linux-land in general).

ok I see, the Allo doc is referring to an old DietPi Stretch image from 2018
https://www.amazon.com/clouddrive/share/TPGwj1F7YligfEE22Xx9y4SqzAPvxVnfKuBSpCB5sE6

MichaIng
Would this need to be updated to Buster? Or is there a reason for being on Stretch still? At least Stretch is causing issues while updating the RPi4

Sweet! That was all it took (removing those 2 “missing” files).

So, thanks for helping me update the little guy, now I want to watch the temperature - hopefully, it will stabilize below 70 C.

I can also ask Allo if they think it would be possible to use the “Powersave” CPU governor setting now - and would that still allow this device to act as a “Roon Bridge” - its intended use - or would CPU requirements of that functionality preclude low-power use.

EDIT: temp still climbing (67 C), but I notice that now, when I attempt to use the Allo “dashboard” interface to shut down various of the audio servers (everything but Roon Bridge) that this no longer works right. I can disable individual services using the GUI, and tell it to save this new state, but it doesn’t work - they are still shown as “running”).

How this could be connected to the update not being able to include those 2 files isn’t very clear… I will go back to the Allo support forum and bring things up to date there, as well as relaying your “Stretch” comments.

pls keep us posted on the outcome from Allo support forum

For sure… however, they are sticking with their “nothing to see here, move along” response to the 70+ C temps, noting that this is “normal” for both 3b+ and 4 Pis. Uh-huh.

On the “Stretch” vs later distro version question, no response at all - but I have been assured in a PM (that being the way they usually want to engage over there in the Allo support forum) that all of this has been turned over to their team. They also went with the “you just needed more retries” answer on the update failure… which, if I got what you were saying properly, is not the problem.

To wrap this up for the time being, I made a post in my “DietPi update fails” thread in Allo support-land that included the following:

well DietPi for Raspberry Pi devices is based on Raspberry OS. Basically we depend on RPi Foundation and their development of a 64bit OS. However DietPi did some homework to be able to support the Raspberry OS 64bit as soon as it get official released by the RPi Foundation.

There is anyway some work to do on Allo images, e.g. I need to find time to upgrade our Allo GUI pre-installed images. I always wanted to rework the way we pre-install images, i.e. allowing to pre-install any software title during DietPi-PREP and still get the cleanup and firstrun setup steps (which include fresh hardware UUID, SSH key and such, quite important). But I think I’ll do it the old way for now, so they’re at least Buster.

The Allo Sparky SBC image needs to be upgraded to Buster as well. Actually the ancient Linux 3.10.38 might have issues with it, but we must take that step anyway, at latest until next summer when Stretch becomes oldoldstable and we drop support for it.

So when this is done, I’ll contact Allo and try to update all our information an backlinks.