Have some feedback, questions, suggestions, or just fancy a chat? Pop it in here.
Post Reply
89 posts

I'm guessing the reason my results are much lower than other's is because my idle temp is very high. I'm not really sure why that is, I only have passive cooling though and no heatsink but one is in the mail and so is a 40mm fan which should really help.

EDIT: For anyone wondering wtf is causing the temps. I'm still a little confused myself as this is all I have running on the device:

Still trying to work out how to get Wireguard to cover the whole device or just qBittorrent.
Top

wow! Mine are way off, I thought they were low but now that I see others it's apparently worst. IIRC there should be no thermal throttling at this temp.

That's weird. I have the same SD-card but 32 GB only. You're getting a lot better speeds than I do!
Top

That's weird. I have the same SD-card but 32 GB only. You're getting a lot better speeds than I do!

I get this on Windows with my Trancend TS-RDF5 adapter on USB 3.0 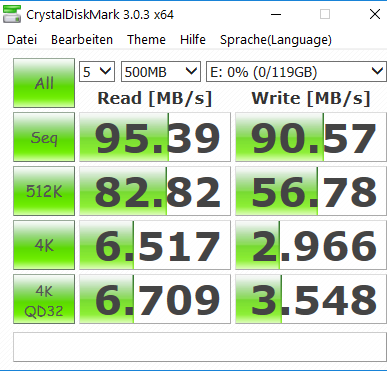 
Using Sandisc Extreme 64g A2 card SDSQXA2-064G-GN6MA It was the fastest card I tried.

Well I got a Noctua NF-A4x10 5V Fan which runs very quickly and kinda loud (~4500 rpm). Also I am sure that the fans are spinning in the wrong direction but the device has some 'polarity protection' that is meant to prevent the fans being plugged in the wrong way. So I dunno. I did see people on Youtube having them spin both ways but I cbf'ed trying to investigate further.

NB! I don't really recommend this fan even though it cut my temps by 32C because it comes with a 3 pin connector, which needs to be plugged into a 2pin that it also comes with, so it can fit on (and doesn't break) the GPIO pins it needs to be plugged into. Leaving you with a ridiculously long amount of cable left that doesn't fit in ANY case what-so-ever so I had to break a hole in my case to let the cable out as there was no way I could force it all inside. I realise could cut the cable off, put a much shorter one on and put a plug on the end but I'd rather not.

Anyway my temps have gone from about 72C before, now to as low as 36C but absolutely no higher than 39C at idle.

So here are my new results, note that they are leagues better than before.
I've now got the lowest temps, second fastest rootfs speed here tested and second fastest RAM. I'm starting to think that the 2GB Pi has 15% slower RAM speed than the 4GB. At least from these benchmarks it seems that way.

tl;dr - Get a fan people! My results more than quadrupled. The Raspberry Pi 4 is way, way, way too hot on its own without a fan.

Since RPi4 runs even hotter than RPi3 without cooling, raising the CPU temp limit to 75 °C (like our default on RPi3) makes sense, via dietpi-config > Performance Options, to avoid too early clock throttling.
You can slower the ARM minimum frequency via /DietPi/config.txt, e.g. arm_freq_min=300 works very well and should reduce idle CPU temp a bid. By default ondemand sample rate is 25 ms, so it only takes max 25 ms for the CPU to raise clocks when usage is rising, thus I see no downside in doing this.

I mentioned some other minor enhancements to reduce loaded hardware parts. Enabling headless mode via dietpi-config > Display Options > Display Resolution and disabling BT/WiFi via dtoverlay and RPi camera related modules: https://github.com/MichaIng/DietPi/issu ... -519947771
Of course only in case the related part is not required

However what I as well got from official Raspberry Pi forum is that a fan is simply required in most cases, or some large heatsink as linked by @morphious.

What we need to find out, is why the RAM benchmarks are not better (even worse, in average) than on RPi3: https://dietpi.com/survey/#bench_ram
The LPDDR4 should be faster of course. Perhaps something else is limiting the R/W speeds to tmpfs, which is how be do this benchmark.
What I also find strange is that sdram_freq is reported to be 0 while default value according to official docs is 3200. I guess this is hardcoded for the RPi4, however some clarification, also if/that the sdram_freq has no effect, would be great.

If I find time I will forward the above questions to the RPi firmware devs.
Top

GTmatrix results show a ~50% drop in the load times from the Pi3 set up.

It's a Wordpress site with heavy 2K+ image and graphic sizes throughout. http://EI.house

I am going to reinstall dietpi on my Pi4. Apt-get update/upgrade gives me a perl-error (unconfigured?). But perhaps this is solvable with a command? (reinstalling perl gives me the same error). sudo apt-get install -f doesn't solve the problem.