It seems like I have a lot of disk activity for a unit that is doing nothing.

I have a simple headless setup. Fresh install. Wifi only. No software installed and dropbear changed with openSSH. I changed the blue LED from HEARTBEAT over to MMC0 to get an idea of disk activity through Dietpi-Config Display Options.

What I see is the blue MMC0 light flash briefly about once per second. This is with nothing running and independent of whether I am logged in with ssh or not.

I’ve already had one SD card go bad on my Neo after it had been in there for a year with it at idle.

I’m wondering what is causing the constant but brief disk activity. I don’t see anything with the top command.

Is this real or phantom disk action and how can I find out? Any suggestions?

To answer my own question. I hope that I have interpreted the results correctly.

To htop I have added the RD_CHAR, IO_RBYTES and DISK READ columns for reads and the equivalent columns for writes. The screen shot is attached below. 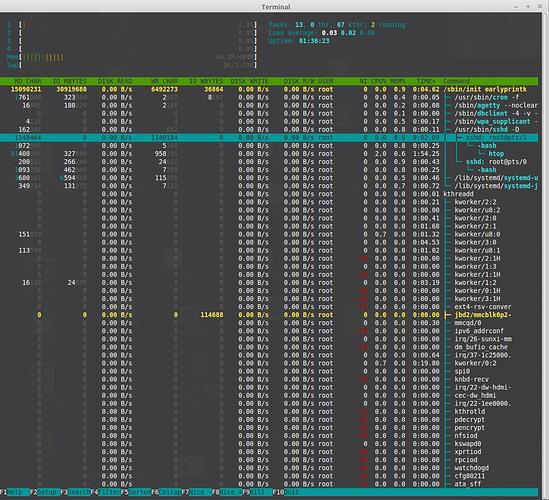 htop.jpg1160×1055 205 KB
The read and write CHAR are changing all the time for sshd process that has htop running under it. My assumption is that CHAR are reads from system ram and therefore has no SD card IO associated with it. DISK READ and DISK WRITE don’t show any activity unless I try and save a file.

IO_WBYTES have no regular increase over an hour though there was a jump of 4K when cron ran and 16K for jbd2/mmcblk0p2. My understanding is that the latter is for disk journalling, which I guess should be updated if cron wrote to disk.

My conclusion is that the brief flashing MMC0 LED that occurs about once per second is due to some system activity, but not SD disk activity unless the flashes are longer.