Is this possible with dietpi? single arcade game on pi zero

First of I would like to thank you for verifying my account, seems like you have a issue with spam bots bet it’s frustrating for everyone involved it was for me checking my emails for days he he he .

I was looking into dietpie to see if it’s possible to run a arcade emulator from boot straight into a single game,

I have searched Google to see if others have used dietpi this way and found very little information, it seem’s that you have done it in the past with Amiga booting to the amiga workbench rom You’re dietpi-auto start function works sort of how imagined I tried the space shooter in dietpi.

Being illiterate at linux I do not understand all the terminology, when I first got a pi zero it was basically out of curiosity because it was so small, but it’s been a very good experience I only done what 90% of what people do and that is use it for retropie, but for me I only like a hand full of games installed it’s a waste. I used to collect arcade boards before I got a wife :mrgreen: and plugging a deadicated pcb in was a fun experience, but anyone who collected pcbs know there huge and delicate. So my goal is to sort of pi that experience.

Hopefully this is we’re you guys can help me, How I like to use dietpi is for a clean install is to be able to install a arcade emulator and configure the controls. put a single rom in the roms folder then auto start straight into that single rom as fast as possible without any boot up text. Is this possible? I know it’s a lot of text above to read but I sort have being going around in circles with linux if anyone could point me in the right direction I be so grateful I won’t even kick my cat for a whole week.

I still have to learn a few bits and bobs with linux I will keep a copy of dietpi to hand just incase .

Thanks for your time
Regards Vas

Back again , anyone care to answer a simple yes or no would be great don’t expect hand holding just don’t want to waste anyone’s time if it is not possible . Many thanks. Vas

Back again , anyone care to answer a simple yes or no would be great don’t expect hand holding just don’t want to waste anyone’s time if it is not possible . Many thanks. Vas

I was looking into dietpie to see if it’s possible to run a arcade emulator from boot straight into a single game,

Yes, if the goal can be achieved with bash commands. You can use dietpi-autostart to setup custom boot script. Once your software is installed and setup, this will execute/run your required commands: 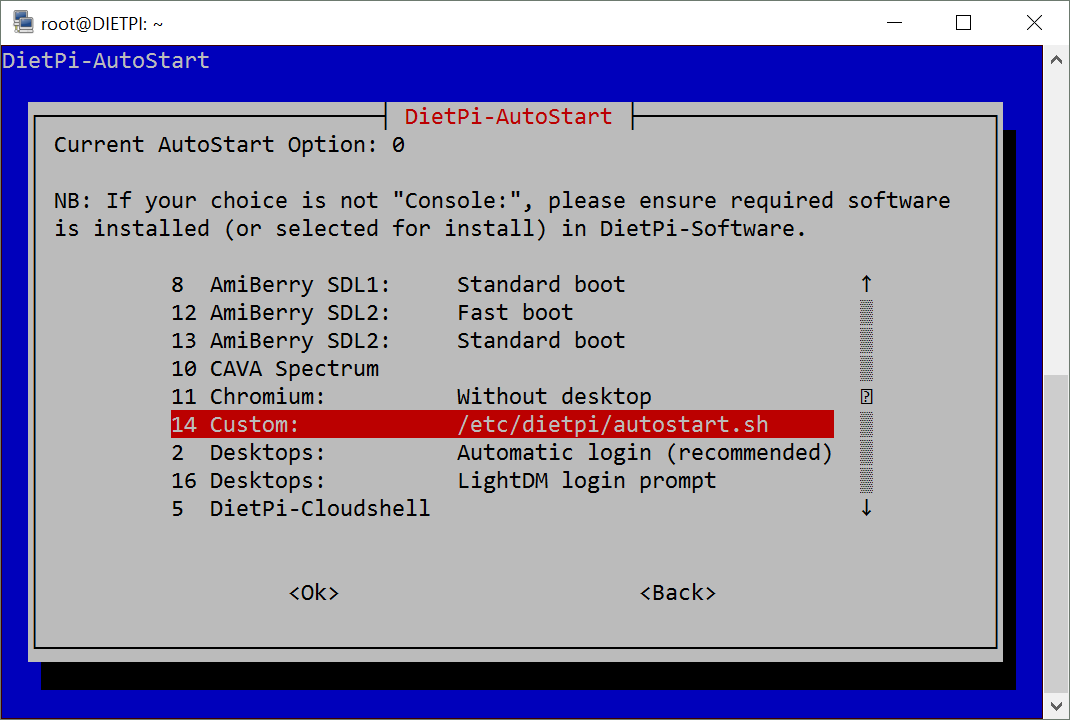