I don’t think it’s needed to adopt the configuration from Jellyfin website. I did a test and it was quite simple to reach Jellyfin from outside world 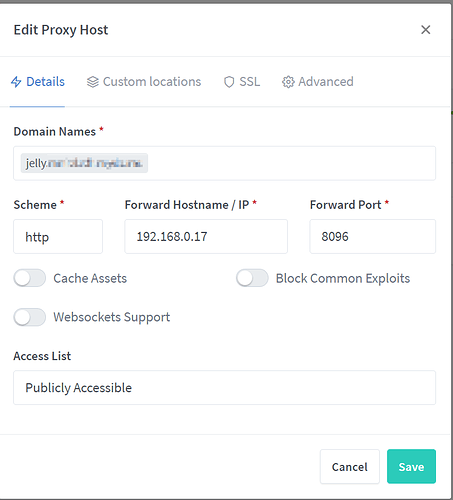 picture.PNG749×826 31.3 KB
and now Jellyfin is reachable on mobile network

IT WORKS !!! Thank you so much for your help and your patience.

Nginx + SSL works perfectly. I’m just having an issue with the certificate for my domain, because I made too much tries while testing. So now let’s encrypt doesn’t let me request more certificates. According to their rate limits, I will have to wait a week before redeeming a new one. So I made a temporary new domain and I successfully requested a cert for it.

So it works perfectly as the base domain. The last thing that I would like to achieve would be to have jellyfin as a subpath [myddns]/jellyfin, for easier integration with other services.

I tried doing this : 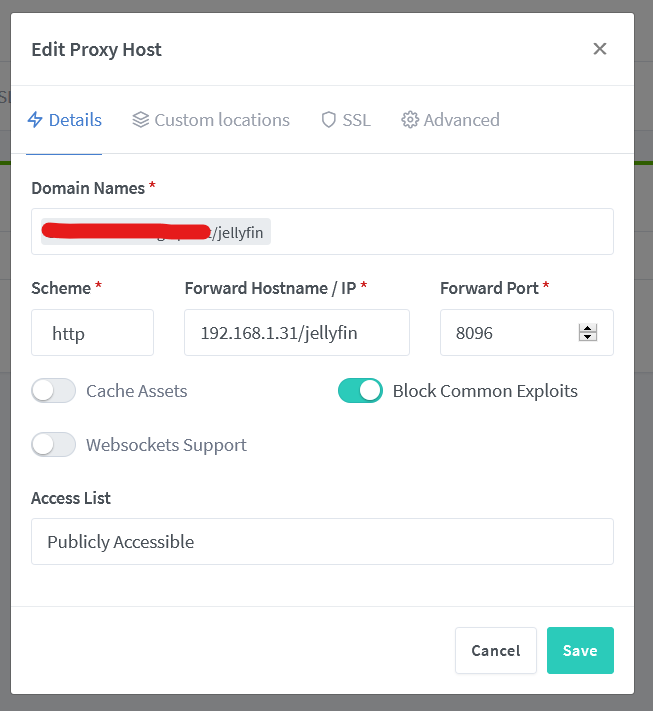 But it doesn’t work. Am I doing this correctly ?

I guess you would need to have a look to the Custom locations tab. On the Details you can’t specify it.

I asked in the Jellyfin discord server about that, and someone helped me to adapt the configuration given in the docs. I did this by directly editing nginx.conf, without Nginx Proxy Manager. It’s probably possible with it too but I didn’t find how.

Here is the solution :

I then used the Let’s Encrypt embedded in DietPi for the certificate.

It’s probably what Nginx Proxy Manager is doing in the background but that’s how I solved it.

I now have Jellyfin running on a subpath with an SSL certificate.
Thanks a lot for your help, you made me understand so much new things !!!
Have a wonderful day !

it was just an idea to use NPM as it is gui based and no need to hack config files. Of Corse it is working as well using Nginx directly

would it be possible to include NPM into dietpi?

This is not planned as it is a simple Docker container, easy to setup