My DietPi install in a Proxmox VM became unreachable. netstat from my laptop showed no ports open. I connected via console in Proxmox, and everything looked fine internally, including various services such as dropbear and lighttpd listening to their ports. Rebooting did not help. There was no firewall running that I can find.

hmm there is nothing on DietPi that could block ports. If they are shown as LISTEN to 0.0.0.0 interface, they should be reachable.

@MichaIng
@StephanStS
any ideas if there could be something on Proxmox layer?

I am experiencing a similar issue with a latest version instance in Hyper-V. After 24 hours of uptime the VM loses its DHCP-assigned address via virtual network interface but can re-negotiate properly from the console via dietpi-config or system restarts. I believe the issue began following the update to the latest version of DietPi.

From our point we don’t have done anything on this layer. There might be a coincidence with some packages that has been upgraded in parallel. If you have a backup, it might be possible to restore on a different VM. This way it could be checked which packages are available for update.

@Joulinar: I suspected proxmox too, but the firewall is turned off there and I can’t find any indication that it’s causing the problem, but it’s still a suspect

@helloelan: My issue is different. I’m using a static IP. This is all about ports being filtered

Quite an interesting behavior. We have a couple of Proxmox systems running within our tech group but none of them has similar issues.

do you have something installed like ufw, iptables or fail2ban?

Nope, I don’t have any firewalls running. I’ve checked on both the VMs and on proxmox.

I now have 3 VMs set up, two running identical instances of DietPi with only Pi-hole/Unbound and a third running only Home Assistant. At the moment, one of the Pi-holes is ok, while the second Pi-hole and the HA VMs are both blocked. Interestingly, if I check from the Proxmox host itself, the ports are not blocked.

That makes me think the issue is external to the DietPis, but it was still worth asking here.

Port scan from an external machine:

Port scan from the Proxmox host:

are there any special network components in between? Some managed switched or other stuff that would have the possibility to block access. I had something similar with a router that I misused as LAN switch and suddenly it starts blocking my PiHole. but just on its current IP. As soon as I changed static IP to something else, PiHole become reachable again.

Hi @free_play, could we check your network settings in the hardware tab of the Proxmox VM?

I am running several DietPi VMs and have no problems since months.
I am using the virtio network card (instead of Intel E1000 or others), VirtIO SCSI (instead of IDE) and the q35 machine type (instead of i440fx).

No special components. Everything was passing through my home wifi router (Netgear Orbi), but over the weekend I finally had the chance to change up my LAN setup – now the Proxmox box is the gateway between my LAN and WAN, and the wifi router has been demoted to an access point. This will give me better control and insight into what’s happening on my LAN. 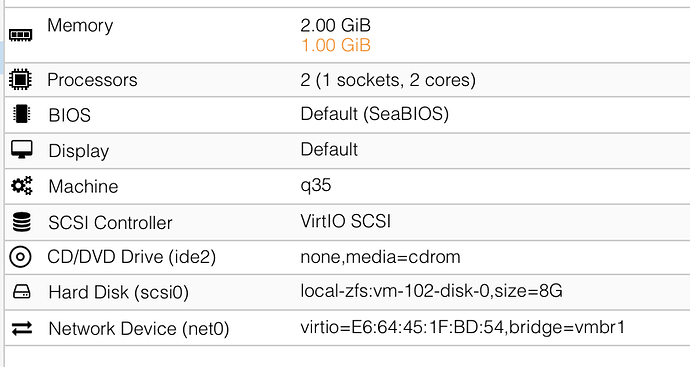 Your other screens are ones that I recognize from initializing the VM, but I don’t know how to view them again on a running VM.

You can look in the “Options” tab. 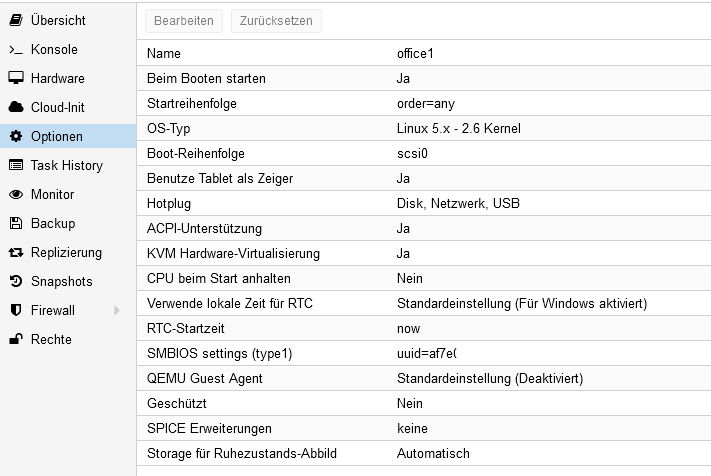 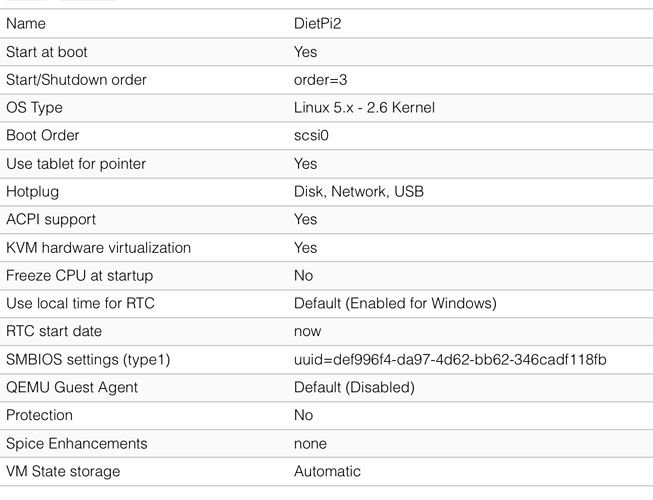 The differences, I see, are

The next thing could be your proxmox host. Which hardware do you use for this?
An option could be to search in the system log of Proxmox for errors. Seems like a search for a needle in the haystack.

That’s right @Joulinar , I could access ports from proxmox host, but not from other machines.

@StephanStS The firewall had been on originally (though unconfigured, with no rules), but I turned it off in case that’s where communication was being blocked.

@free_play: Now the next question would be to ask for your used hardware on which Proxmox is running.

I’m running this on a Proctectli Vault mini pc.

I have reconfigured the networking topology since having my original issues (an OPNsense VM is now the gateway device) and the problems haven’t recurred. The problem is unsolved, but hasn’t recurred since then. So I’ll “close” this ticket for now.

Thanks for your responses!

The problem is unsolved